So we went to KL over the weekend to get my Tony Romas fix. It was a really short trip.
We flew over to KL on saturday on the 8.45am flight and then back to SG on Sunday on the 5.00pm flight.
Thank you Airasia for the many many SIN-KL flights.

This time round, we brought my in-laws together with us. Although it was a wrong timing cos my MIL sprained her back weeks earlier and had difficulty walking and we had to do many pitstops so she can rest and sit down and take a breather. I almost felt guilty for dragging her to KL just so i can have my cravings fixed. But she said she enjoyed the trip. So i don’t feel that guilty anymore! And to think initially she was worried i would be too tired out from all the walking! But i walked like nobody’s business.

On a sidenote, Rusly’s hair is of the same length as mine now. I think even longer and i’ve been pestering him to get it cut but he refused to listen! Macam nak bakar je rambut dia tau time dia tido.

Our 1st stop right after we landed in KL was to head over to Publika Shopping Gallery.
Initially i wanted to go to Journal by Plan B but we were so hungry by then, it was close to 12.00 noon already, and i was scared if we eat at Journal, then we wouldn’t have space for Gyu-Kaku so we went ahead to Gyu-Kaku instead.

We were the 1st group to come in for lunch so one of the staff Mike offered to help us with grilling the meat etc and i was glad he did that cos that boy is good with his meat! I think if it was up to us to cook the meat ourselves, we’ll probably over-cook it and also cos four of us really macam tak kuasa nak masak mood.

We ordered one of the set and in a second, we were overwhelmed with the amount of meat we have! For a while, i doubt we could finish them all up but yes we did!

We definitely had a good time at Gyu-Kaku and would definitely come back for seconds!
I knew Rusly would love this place cos he’s such a meat person.

I initially wanted to go over to Wondermilk and grabbed one of their cakes but it started raining and i was too full to be going around looking for Wondermilk and also we were lucky a taxi passed by so kita grab je lah the taxi. We then head over to Novotel to check in. It was 3.00pm by then, had a good rest before heading over to Pavillion for dinner!

The one i was craving for: Tony Romas! 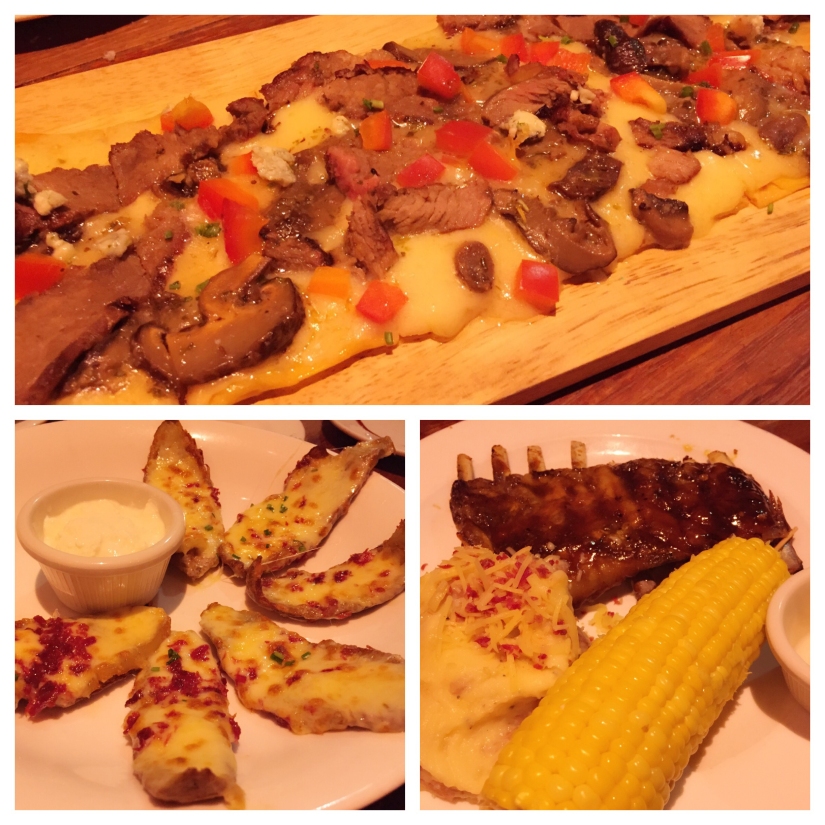 We didn’t order much cos we were still full from Gyu-Kaku. So i ordered my favourite Ribs and Potato Skin.
So so good! I cannot wait for their JB outlet to start business. Then i don’t have to go all the way to KL to have this!

We ate few more stuff on that day and before we fly off back to Singapore but by then i was too lazy to take pictures so yeah no pictures. I totally busted my sugar free diet this trip. Only this once ok baby! But i bet she’s happy cos she was kicking furiously each time i finish my meal.

This would be the last trip before i give birth. I wished we stayed for another day but Rusly need to save his leave so maybe we’ll do another return trip with Baby!