Had my blood test yesterday and if you’ve guessed from the blog title itself, you should be able to figure out the test results.

It’s gonna be a long post ahead but totally worth it. God knows how long i’ve waited for this.
Ok lah not as long as some people i know but long enough by my standards.

DAYS LEADING UP TO THE BLOOD TEST:

On wednesday, i went to Lot 1 to do some light shopping for Mother’s Day and while queuing up for taxi, i noticed this middled-aged kakak kept looking at me, few times and so i smiled at her and then she started the conversation:

Then she handed me a brochure. 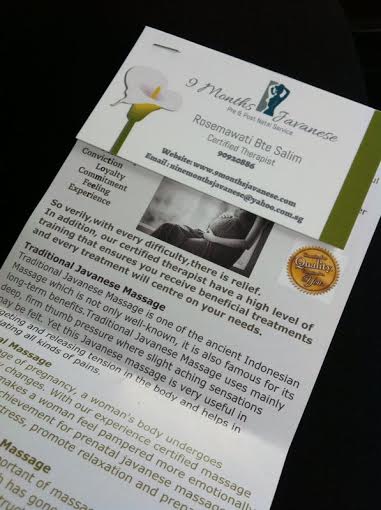 Turns out she’s a pre-natal and post-natal therapist and while i do know she’s trying to do some marketing. I just find it really weird she singled me out like that. Cos i was just wearing a Tshirt that day and it wasn’t even tight.

I told Rina & Ain about that encounter and these two got so excited. We got talking about this again & again and i figured i should just do a test lah!

It’s been more than 14 days since my trigger shot and by then the HCG from that trigger shot should have left my system already. I had one cheapie pregnancy test. The very last one, one from Guardian and also an expired Clearblue Digital Pregnancy Test. Yes, i have not POAS for the longest time!

I did the test at close to 5.00pm. Usually, they recommend doing the test with the first morning urine cos it would be the most concentrated one so i wasn’t sure i would get a positive with this. 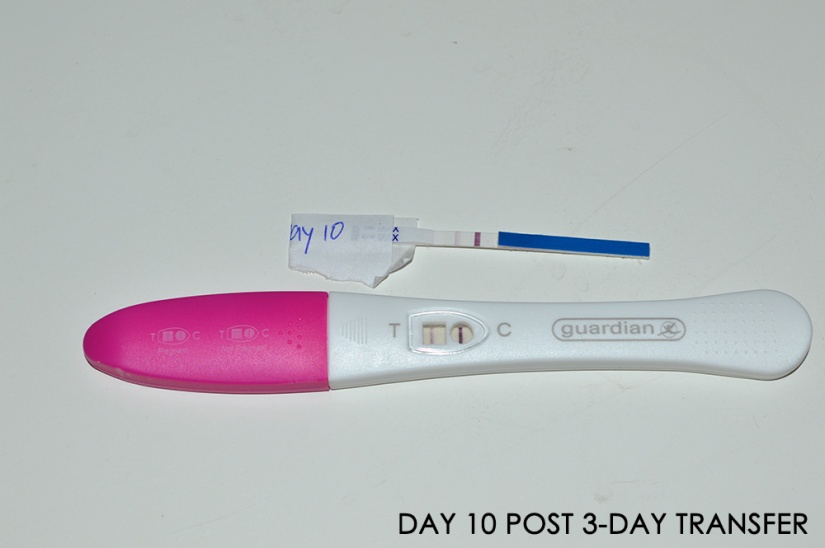 No picture of the Digital one here cos i just took this picture today and the digital one is now blank.

But here’s the picture of the digital test i took on that day.

Now as much as i wanna be very optimistic about this, i was too overwhelmed to.

1. I NEVER had a positive test before.
2. That line on that cheapie test was there but really faint.
3. The lines on the Guardian test took very long to show up.
4. The one on the digital test, while it was able to detect pregnancy quite fast, it is an expired test. So i refused to believe.

But deep inside i kept thinking, it could be a very strong positive considering it’s only Day 10 and all tests were taken with a 5.00pm pee! Not even the first morning urine.

so the next day, i went to Watson and bought more Pregnancy Test.

Out of all three, the Clearblue one showed the + sign super fast! Almost immediately.

The Fortel & Guardian one took their own sweet time. This time, i took these test using my 1st morning pee.

I was shocked. I didn’t even cry.
Cos this time it’s real. I was trying to figure out how to tell Rusly about it. Should i keep it from him 1st and wait for the blood test just to be sure because honestly, i was still unsure if it could be a false positive.

That night, i was supposed to go out for dinner with Rina & Ain and i’ve been msg-ing these two regularly and it was so hard not to tell them when they’ve been so excited all these while. Just before i left for the dinner, i waited for rusly to come back home and while he was keeping himself busy, i took the test and showed it to him. He was so shocked (that i tested before the blood test hahahha) and then he kept asking me “So u pregnant lah ni??” Hahahah

We had the longest hug and for the 1st time since testing, i cried. I was so happy to see this man i love this happy.
So happy that Allah finally granted our wish and trusted us with this amanah.

We were grinning all the way and he kept touching my tummy and telling me i should not be wearing the tight pants for dinner but i was telling him the baby is still small. The size of a poppy seed and i’m so fat and all my tummy fat is probably cushioning the baby very well.

But they say it’s always wise to dengar cakap suami. Hahaha
Halfway through the dinner, i had to unbutton my pants because i was so senak i couldn’t breathe properly and i was just having mushroom soup at that time. Not even mains! I was also burping and burping and by the end of the dinner, i felt so stuffed and kept feeling i had to go to the toilet cos i was really high tide. But in actual fact, i was just peeing a very small amount of pee. Very misleading seh.

That was the night before the blood test. I was itching to tell the girls of the positive tests but kept holding back cos i wanna know the blood test results.

MORNING OF THE BLOOD TEST:

That morning, i took 2 more pregnancy test. For fun. Hahahaha 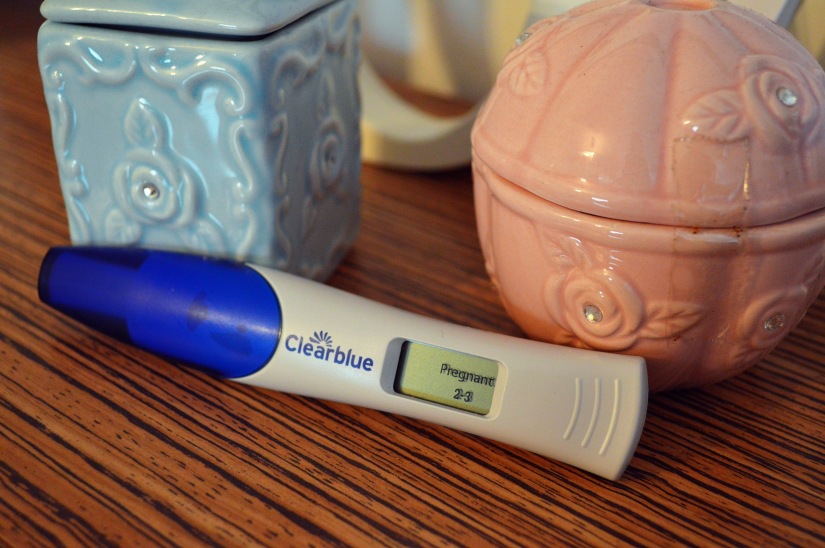 Blood test was scheduled for 8.30am but i overslept and reached NUH at 8.45am. Took the blood test and then the nurse told me they will call me in 2 or 3 hours with the result and if it’s positive i’ll be required to come back to NUH to collect new medications etc.

So i went to Jem to have breakfast and do some shopping. Got my Yankee Candles and some Bonia stuff for the MIL. Went in to Marks & Spencers to get some wireless bras (no they cannot give you internet connection) cos wearing wired bras make me so uncomfortable. My boobs are so sore and i swear they are expanding! When i tried on the wireless bra at M&S Fitting Room, i remember saying this to myself “Ya Allah nikmatnya!!!” hahahahah
and i wanted to wear the bra then and there seh. It so comfortable lah seh. Nevermind that it’s a boring plain bra but it’s the softest and the most comfortable one i have now.

I was still waiting patiently for THE call. Felt even longer than the 2ww! I went to Burger King to have a drink while waiting for the call and then at 11.38am, it finally came!

Nurse: Dyan, where are you now?
Me: At Jurong East. Why?
Nurse: How long will it take for you to come back NUH?
Me: About 30mins.
Nurse: Do you still have your medications? Your crinone gel etc?
Me: Only for today’s dosage.
Nurse: hmmm… oklah u come back now can?
Congratulations you’re pregnant! Hahahahaha

The nurse very bad lor. I was so scared i had a bad result, that’s why they want me to continue my medications seh.
I asked her what’s my beta and she said “508. very good numbers!”
I really don’t how good is good.

I went straight ahead to NUH and then i saw all the nurse smiling and congratulating me and again telling me i had good numbers! Apparently for someone whose blood test is on Day 12, my numbers are on the higher side.
Everyday the numbers are doubling up so today, it’s supposed to be 800+ already. By next week, it should be around 1500 – 2500. Apparently the passing rate is 100 and if i get a 100, i’ll have to come back again and do another test to see if it has doubled up. Else, it could be a chemical pregnancy.

Went in to see Dr Lim, who was happy with my results and still laughing about my ET when i shouted i wanted to pee! I can’t believe he remembered seh! So he told me i have to continue taking my progesterone inserts for two weeks cos this is somehow an artificially made pregnancy and my body is not producing progesterone naturally hence the need to insert it vaginally until the placenta takes over and support the pregnancy naturally. Apart from that i also have to start on a twice weekly injection on the butt. Either to be done at NUH or the GP. I chose to have it at the GP cos it’s more convenient.

I had the first jab at NUH though since i was there already and man, it HURTS!!!!
So so bad. Told you guys i have a high threshold for pain kan? But this jab is no joke seh. It’s oil-based so once the drug entered my body, it numbed the entire area and stings so bad i couldn’t sleep on that side. It took about 6 hours before the pain was relieved. Probably the only thing i’m not looking forward to but i only have to do it four more times so i shall not be a wuss and just deal with it.  Afterall it helps to support the pregnancy!

Now breaking the news was also overwhelming. I had few people who knew about the blood test today msg-ing me about the results and i was so happy to know how happy they were for us. It was so heartwarming to let them know of this miracle Allah bestowed upon us. The first person i called after the call from the hospital was Rusly. I cried again because this time, it’s really for real. Like “ehhhh i have a baby inside me kind of real. ” Hahaha

I have yet to tell both families because we want to do it face to face.
Will be telling my side today! Because we are heading to my mom’s place to celebrate Mother’s Day.
Will be telling my in-laws on Tuesday because we’ll be celebrating my MIL Birthday and Mother’s Day on that day.
I absolutely can’t wait to tell them and see the joy on their faces. I know they’ve been waiting for this good news.

Probably one of their best Mother’s Day gift ever.

With that, please keep us in your prayers. My next scan is in 2 weeks time. We should be able to know by then if we are having a singleton or twins! Either way, we are blessed.

Miracles do happen and Allah rewards us for all the hard works we’ve put in and the patience & strength we had.
I hope for a smooth 9 month journey and hope to see my baby come January 2015!

I will still be keeping the pregnancy posts private for now till a later date when we’ve decided to announce officially.
I’m more vocal on the pregnancy on Twitter cos i don’t have that much followers there but you’re welcomed to follow me there! I only have about 20 people  who know the passwords to my IVF Posts so i figured that’s alright because you people have been really encouraging throughout my IVF journey and since most of you guys are currently TTC-ing, i hope it sheds some light on the IVF process.

Lastly, here’s spreading tons of Baby Dusts to all of you who are TTC-ing!
Miracles happen. Keep positive thoughts in your head. Believe in Allah.