We are back from Penang!
Nadya survived her plane ride. Yes i must mention that because that was my biggest fear. That she’ll end up with airplane ears. To be honest, i hate flying cos i get airplane ears all the time, and that is why i’m not a stewardess (apart from being too short & fat, of course. HAHAHAHA)

So yes i know how painful airplanes ears are and was pretty scared if Nadya kena also. It’ll be so kesian cos the other infants in our flight were crying bloody murder.. But i read up and found tips on how to get baby to survive airplane rides and i’m gonna share how i did it.

Voila! She didn’t cry at all. So i’m guessing those tips worked. I also think that the plane engine noise was kinda comforting to her cos it’s white noise. She slept thru’ it. Amazing.

Now, packing for a baby was another story. I knew it would be tricky. I didn’t wanna overpack but i also didn’t wanna miss out anything and then get flustered over it. So i do up a travel packing list (which i’ll share later!), print it and tick it off one by one, making sure i did not leave anything out.

Previously, me & Rusly only need to bring a cabin luggage to fit both our clothes for a 4D3N trip. Now, we had to use the largest sized one and because we are now packing for three and she have her toiletries and all, i got myself a luggage organizer from Qoo10 and it was helpful! It helped us to sort out our stuff and we didn’t have to rummage thru’ the entire luggage for our stuff.

So neat & tidy and we were able to separate her toiletries and ours etc and only took out whatever’s necessary.

What we brought for our trip. I babywear most of the time when we are on the streets and then when we sit down & eat, i put her in the stroller.
Luckily she loves being worn AND lying down in her stroller.
(Cos after what i’ve spent on that stroller, kalau dia tak nak duduk, memang aku deduct dari duit sekolah dia nanti! LOL)

Apart from those two things, it was pretty easy bringing an infant on a plane. I feel if you know their routine well and what you can do to appease them when they’re cranky, you’ll survive! 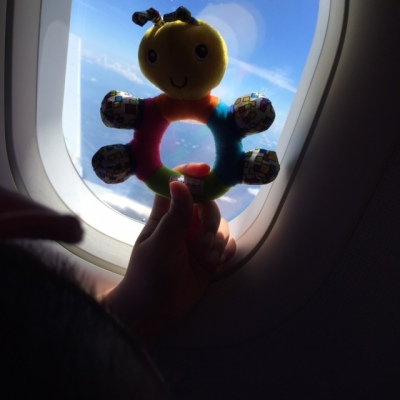 For this trip, we brought her favourite rattle, Katie.
Yes, i named all her toys like a freak mom would do. I’ll introduce all her toys to you guys in another post. #crazymomalert

We really enjoyed the trip and our Penang Trip will be in another post ok!

2 thoughts on “Travelling with a baby.”