Met the other girls for Elyn’s wedding yesterday. Initially thought i might not be able to make it cos Rusly might have to do Hospital duties but Alhamdulilah the MIL got discharged on Friday so we just have to head over to Yishun after the wedding at Woodlands, so it was pretty convenient to do a quick trip to the wedding.

The last wedding before i give birth and be deprived of Ayam Masak Merah orang kahwin!
Reached at about 12.30pm, just nice because the groom just arrived with the kompang & his entourage. We were sitting too close to the pelamin though so the kompang was right behind me. Baby had a blast dancing to the rhythm of the kompang.

Managed to meet Baby Shafa again. Kesian dia kena romos2, pipi kena cubit2.. tangan kena squeeze2 by all the kakak-kakak. Such a sweetheart. Each time she smiles, it got us in an excitement. “alahhhh.. tgk tu dia senyum.”
Shafa pun layankan je! Lol.

I had to leave shortly after Elyn left for the Groom’s side because Rusly was waiting for me at the carpark. He wanted to catch up on some sleep, so kesian. That and because he refused to wear long pants because it was such a humid day and i refuse to let anyone wear bermudas to weddings. Hahahaha 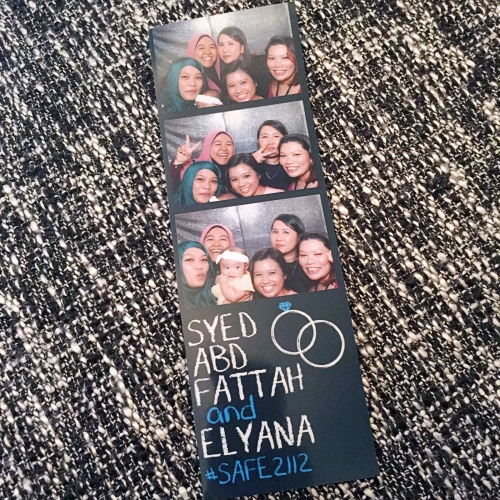 One last thing to do before leaving. Photobooth pictures with the girls!
5 girls and a baby.

Who knew blogging brought us girls together, eh?

7 thoughts on “One Last Wedding”