Following up from my previous Diaper bag post where i got my 1st Ju-Ju-Be.
I bought the Hobobe at first and it really served me well. It’s good for quick trip out but on days where we’ll be out the entire day, it’ll be a little squeezy in there and i can’t fit in my digicam. #firstworldproblems.

Since Nadya will start eating soon and we’ll then bring out snacks lah etc, i thought upgrading to a bigger bag would be useful. I love the Ju-ju-be material and the fact that it’s light on it’s own so i looked around for a size i want & like.

Since i’ve already got the Admiral design from the Nautical Collection, i was aiming for the Countess next from the Legacy Collection! But which type?
I wanna try the backpack style next but i was scared if it might be bulky. Especially since i babywear all the time. Imagine front carry, back carry. Aku dah lah besar, then rempuh semua orang. although i’ll be the best person to bring to Bazaar Geylang. Abis semua aku rempuh nanti.

The only option i have is the Be Right Back or the BFF. But honestly, i don’t like the Be Right Back one that much and it does not come in The Countess design. So BFF it is! I contemplated for quite some time though. Looking at Youtube videos to see how big it’ll look like and all.

When i 1st saw it, i thought it was a little bulky. But after wearing it, it wasn’t as bulky seh! It fits me just nice! 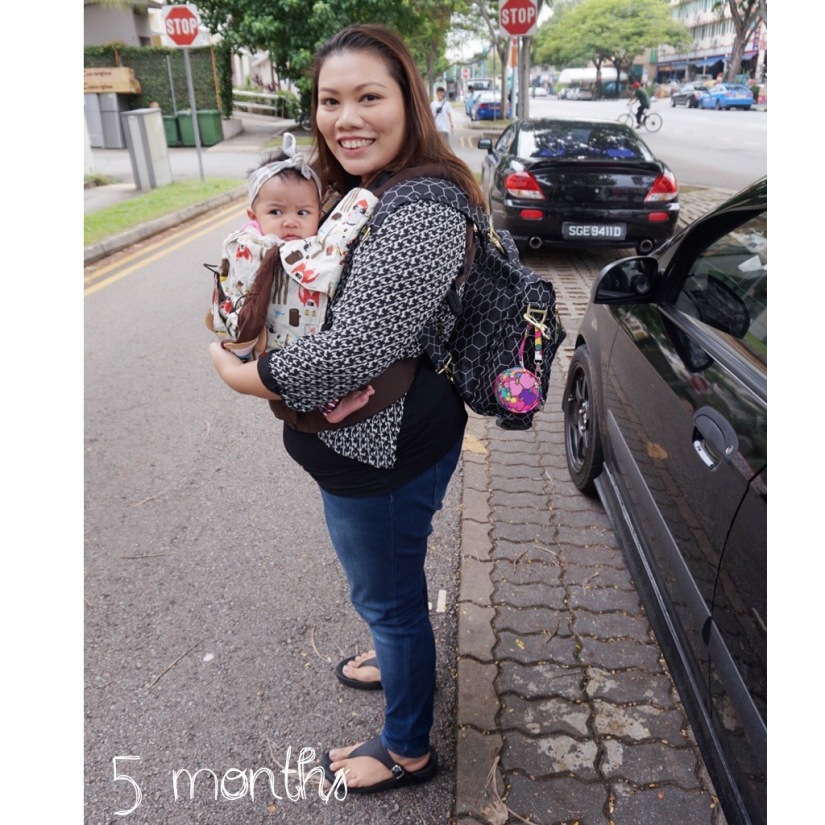 This is how i look like when i go out with Nadya most of the time! It’s really convenient except that i don’t like putting my wallet & HP behind cos of the possibility of being pick-pocketed. In conclusion, i really like the BFF that i got myself another one!

I love Geometric designs and this one is love at 1st sight. Love the mixture of pink, grey & black. Neutral with a pop of colour!

So this time round, i got myself the BFF and the Be Set, which is a trio of small bags that can be converted into slings. So handy to have! They even gave me a free coin pouch cos i spent more than $100.00 on Pinky Swear items.

The next one i’m patiently waiting for is the Perky Toki! It’s the only Tokidoki print from Ju-Ju-Be that i like!

It’s Pastel coloured and the Tokidoki cartoons are spread apart. Won’t be getting the BFF though! Probably get a Be Set and the Starlet Bag cos we need a duffel bag for holidays & swimming trips!

Sigh… what did i get myself into. I’m sinking deeper into the diaper bag hole.
But then, it’s all i use these days seh. I no longer use all my designer bags. Sometimes i take them out and stroke them but the thought of putting in a flask and all inside them bags macam so sayang gitu.

So cute diaper bags then!

and i do know of people who use these diaper bags as normal work bags! hahahaha. Poisoning you guys to buy also! Lol