Two more weeks before we head over to my dream city!
Had a stroke of luck yesterday in the wee hours! A friend initially recommended the Airbnb apartment she stayed in when she was there previously. She loved the apartment cos it was further up from city area but 10mins away by Express train to Times Square. Just 3 stops away je. And the subway station is right across the apartment. Best thing is the affordable price of course.

I love the apartment but unfortunately it was snapped up just as i was communicating with the host. Not our rezeki i feel so i looked around for other apartments. So many swanky apartments tapi seriously mengarut cos most of the them are walk-up apartments. As in takde elevator seh. I don’t mean to sound spoilt but there’s no way i’m gonna climb up to 4th or 5th floor with luggage, stroller & a toddler. It was so hard to find an apartment with an elevator. Those with elevator are usually ones with the doormen kind and go for at least $350 per night which is more or less the same as hotels so macam tak masuk akal. Ada satu apartment i like, tapi takde TV. Apa maksud tu. Nak suruh aku buat anak ke? Lol.

The ones that fit my requirements & budget pulak do not allow kids below 12 due to noise etc. Sighhh. So i booked Row NYC but still halfhearted so i booked and chose the option to pay to the Hotel directly just in case i change my mind. It came up to S$2600 for our 7 nights stay which was slightly above my budget cos i only wanted to pay max $2500 for accommodation. But i was halfhearted cos it’s very near Times Square and noise could be a problem for Nadya. I think it’s already hard enough to get her to adjust to the new timing etc abih kalau too noisy for her, i think she also frustrated.

Then on Monday, i emailed them to ask for late check-out and pro-rated hours cos our flight back is at 23:00hrs and i don’t want us to be stranded with our luggage, i also teringat to confirm if they have a fridge in their rooms. Turns out they don’t! Selamat i asked lah cos if not, where am i gonna store fresh milk for Nadya’s consumption kan.

It was then i browsed Airbnb again to see if i can find something this time round and guess what?? The apartment my friend recommended is available. I contacted the host to confirm it’s available and booked it right away! I asked him how come it’s available and he said he just had a cancellation for that date 1 hr before i msg-ed him. That’s really our rezeki lah cos guess what, the total cost of the apartment is only $1160!! I saved $1440 gaissse. That’s shopping money! Weeeee. 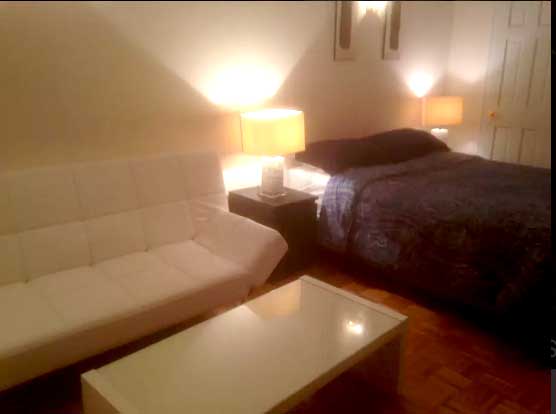 It is a simple apartment. No frills but it fits all my requirement.

Most importantly, it has to be clean and based on the 100+ reviews, the place is neat & clean and everybody loved the close proximity to the subway station cos it’s just 10mins away to Times Square. Yayyy.

So glad our accommodation issues worked out in the end.
We’ve applied for the ESTA, settled our travel insurance as well.

I’ve also booked Dubai International Hotel for our 7hrs transit at Dubai Airport because after 14hrs of flight, baring kat lantai dengan toddler for 7hrs tak kelakar seh. We only book for 4hrs though after reading Farhana’s entry on it, i emailed them and ask for a pro-rated rate and they’re charging $220 for it but to be honest, i don’t care lah janji that 4hrs tu kita dapat tido atas katil. The remaining 3hrs, kita can makan Shake Shack and jalan2 around the airport before we take the next flight out!

I have to go book our Mobile WIFI next and then do up the itinerary. Can u believe i have not done up the itinerary yet! lol. We’ve also decided not to get the New York Pass since Farhana said macam tak worth it sangat. Kita pun not really keen in going in and out every museum etc cos i’m not exactly a museum person and i don’t want to feel like i have to go to certain places just because i’ve paid for it anyway. Maybe next entry i’ll list down the places that i really want to go for this trip cos this entry is getting too lengthy! ❤