Yes, over gila aku. Part Disneyland je kena capital letters, siap exclamation mark semua.
But that’s because Disneyland is indeed the happiest place on earth.
You can literally hear that “happy song” once you enter Disneyland that makes you wanna jalan henjut2 that kind. Not kidding. 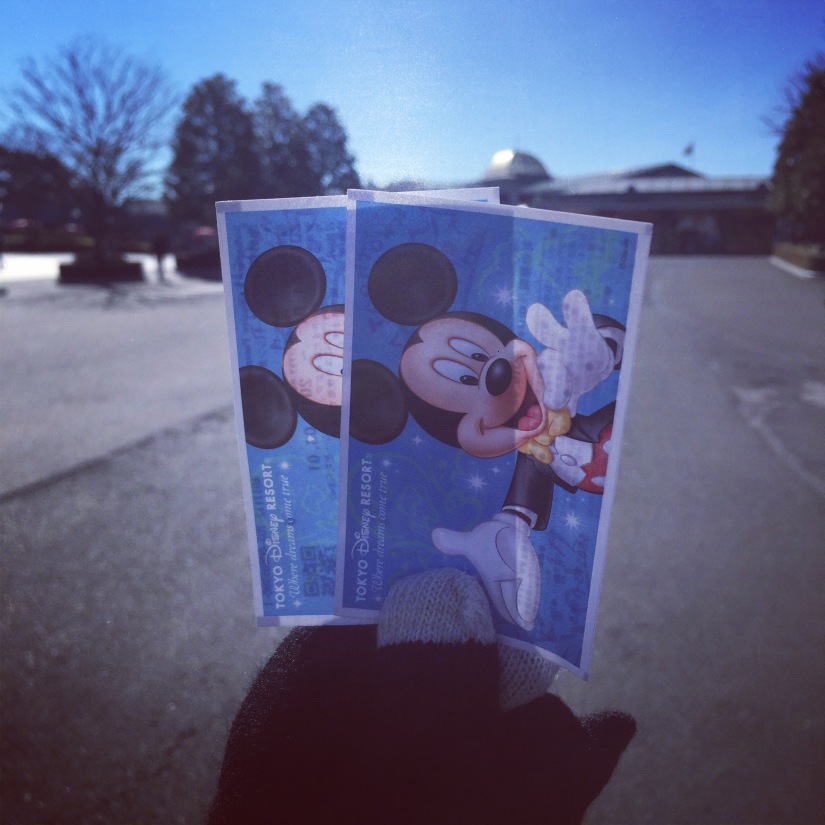 So i got the Disneyland tickets from JTB Singapore cos i didn’t wanna waste time queuing up for the ticket at Disneyland itself. It’s $88.00 for Adults & $58.00 for CHild (4-11yrs old). Free for anyone below 4!

We took a highway bus to Disneyland from JR Highway Bus Terminal which is few minutes away from our apartment at Shinjuku. It’s actually next to Takashimaya & Times Square. It’s not a huge place but you’ll know it’s a bus terminal. The journey took about 45mins and costs ¥820 (S$10.00) per adult. Bus is clean & comfortable. We even managed to take a nap! It’ll stop at Disneysea first. Disneyland is the last stop.

You can also go there by the subway but you gotta change stations and all. I seriously malas already so if you stay at Shinjuku, take this highway bus! U can just sleep in the bus, it’ll take u straight to Disneyland. Be careful of the timing though. The last bus leaves at 9.50am.You can check out details on the bus here.

One of the Disneyland Staff was kind enough to ask if we would like to take pictures at the entrance. We didn’t even have to ask for help seh. Why are they so niceeee.

Plenty of space for her to roam around and she really roamed around tak kisah dunia. I had to keep chasing after her. -___-

We watched our 1st show for the day at Theatre Orleans. Minnie Oh Minnie!
I really wasn’t sure if Nadya would appreciate it but… 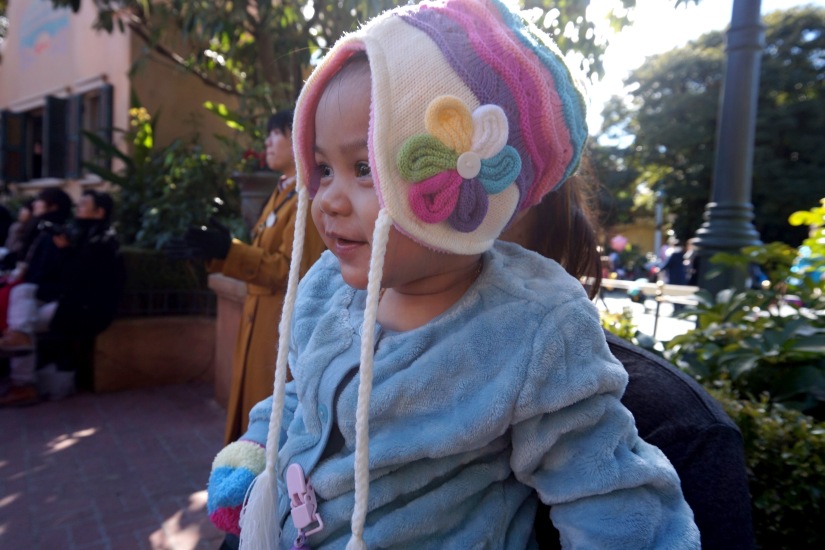 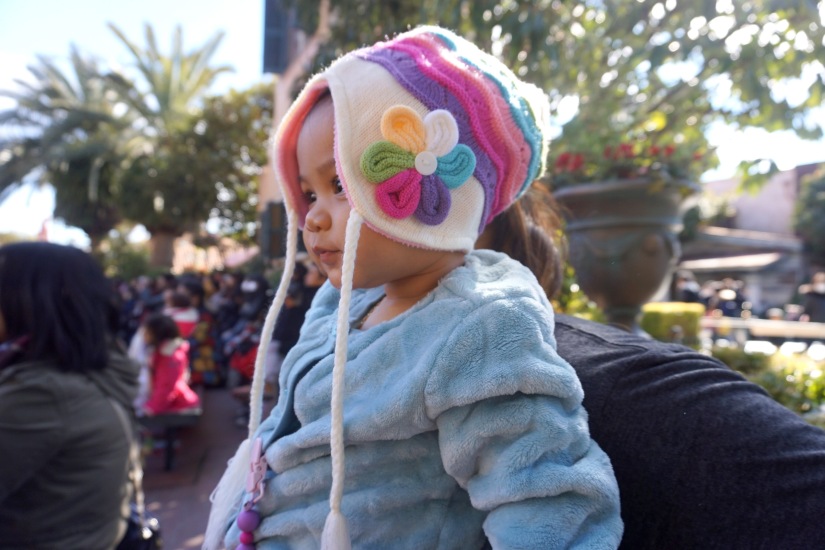 … Nadya was smiling throughout the show. Really macam paham ni budak. Haha
So i’m guessing she enjoyed it too. So yes, never too young for Disneyland. Never too old either!

We didn’t really take any rides cos Nadya is too young and to be honest, i’m too lazy to queue up and all.

Initially i was apprehensive on visiting Disneyland during winter cos it’ll be cold and all. But we arrived at about 11am, by then the sun is up so it was a nice weather. You have the sun shining bright but really cooling air. But we still bundled up cos it was still cold! At least 10-11 deg during the afternoons. But you’ll see some young Japanese girls ke hulu hilir kat Disneyland dengan skater skirt pendek. Me & Rusly macam nak diri depan dorang and salute je. Kulit apa sak pakai skirt pendek time winter.

And we argued whether they were wearing skin-coloured stockings or anything. I went so close to one of them and discovered that nope, no stockings. Confirm chop guarantee cos aku nampak bulu roma dia ternaik. Hahahaha. 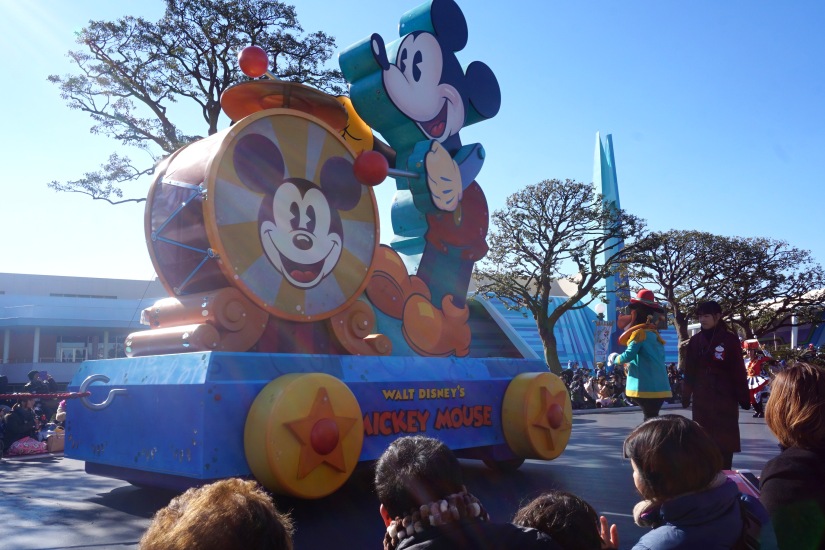 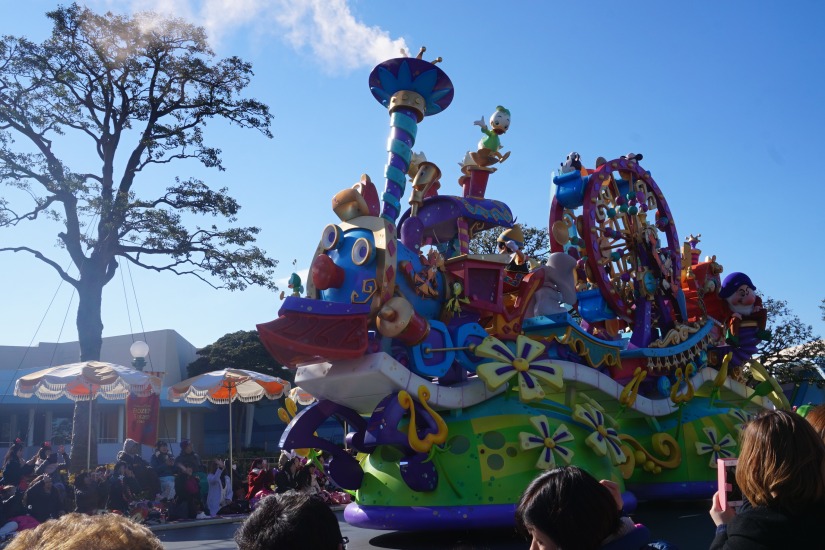 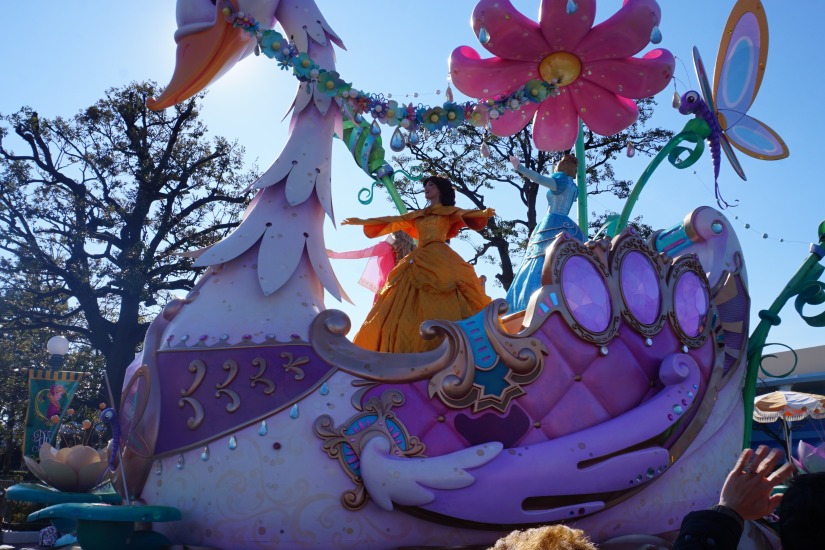 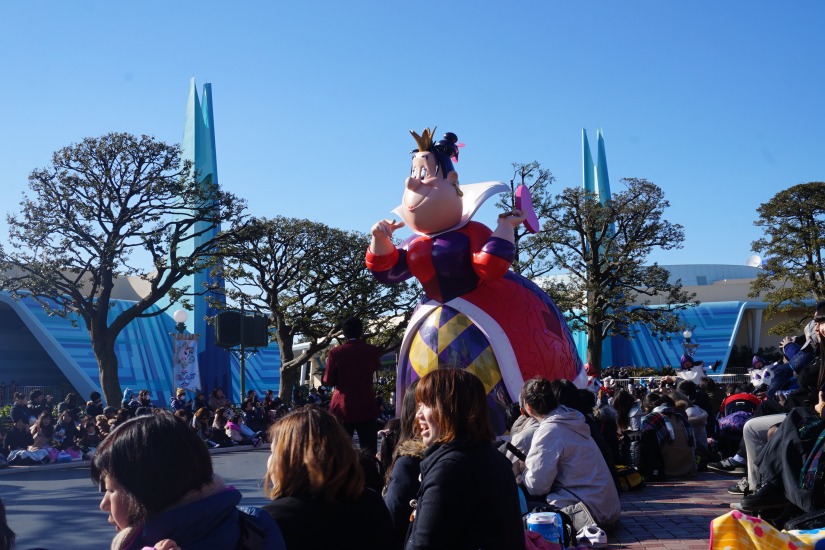 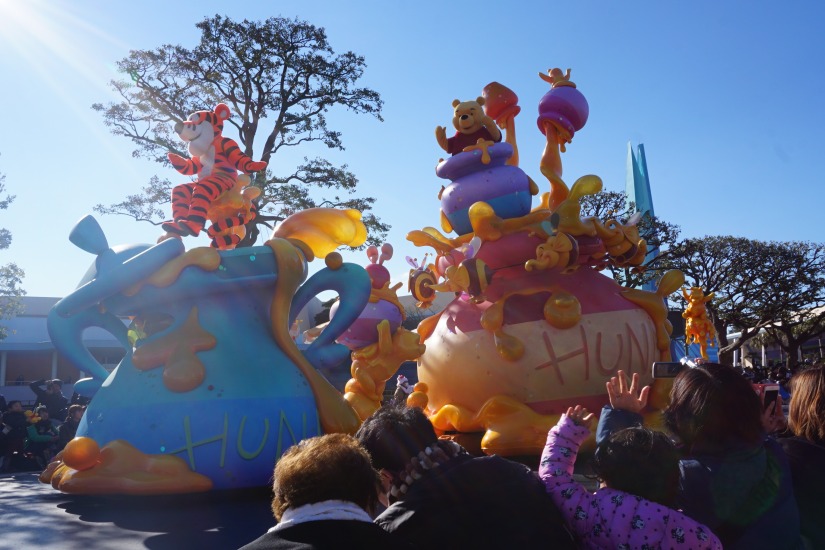 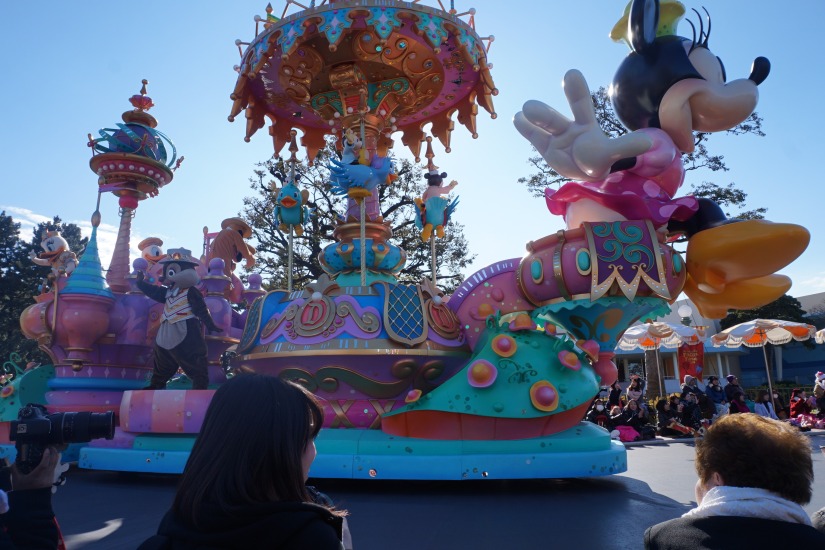 The parade was obviously my favourite lah kan. I think i enjoyed it more than Nadya. Aku duduk depan. I left Nadya with her father. Yeeeehhhaaaaa.

Oh can i also mention i love love love their Baby Room? We went to the Baby Room nearby Toontown and it is so pretty & clean. There were people there to help you to the changing station, lay the changing mat for you and all. They also have a place for you to feed meals to your baby. The whole atmosphere was just really nice. Oh and Rusly noticed another thing. I was the only mom changing diapers there. The rest of the changing station were occupied by the daddies!! I’m not kidding! The daddies there are quite hands-on! The mummies were outside, waiting for the daddies to be done. Rusly noticed that cos he felt out of place. HAHAHA.

We shopped around for souvenirs and bought benda-benda merepek for Nadya (and me!) and left Disneyland at about 4.00pm so we could catch the 1st bus out which is at 4.10pm. I love Disneyland but it was really tiring. So we left early. We took the same bus, at Disneyland Bus Station and that picture above is Nadya interrupting some nenek-nenek nya conversation. tsk tsk. 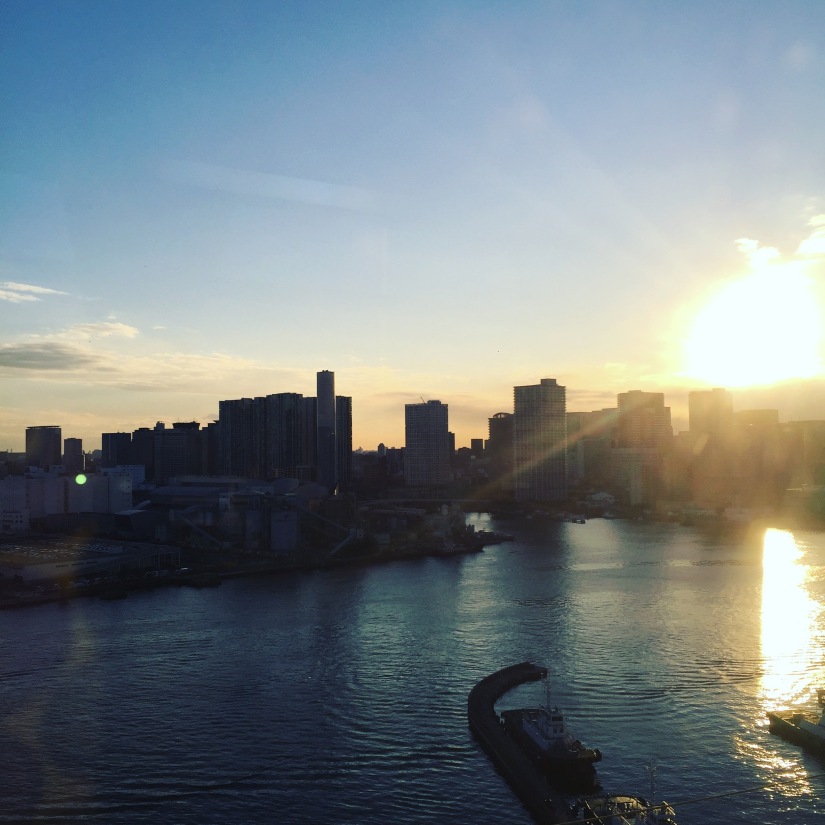 The view from the bus. It was so pretty. ❤

It was about 5.00pm when we reached Shinjuku. It was dark and we were tired so we wanted to get dinner and just rest.

So guess where did we go? 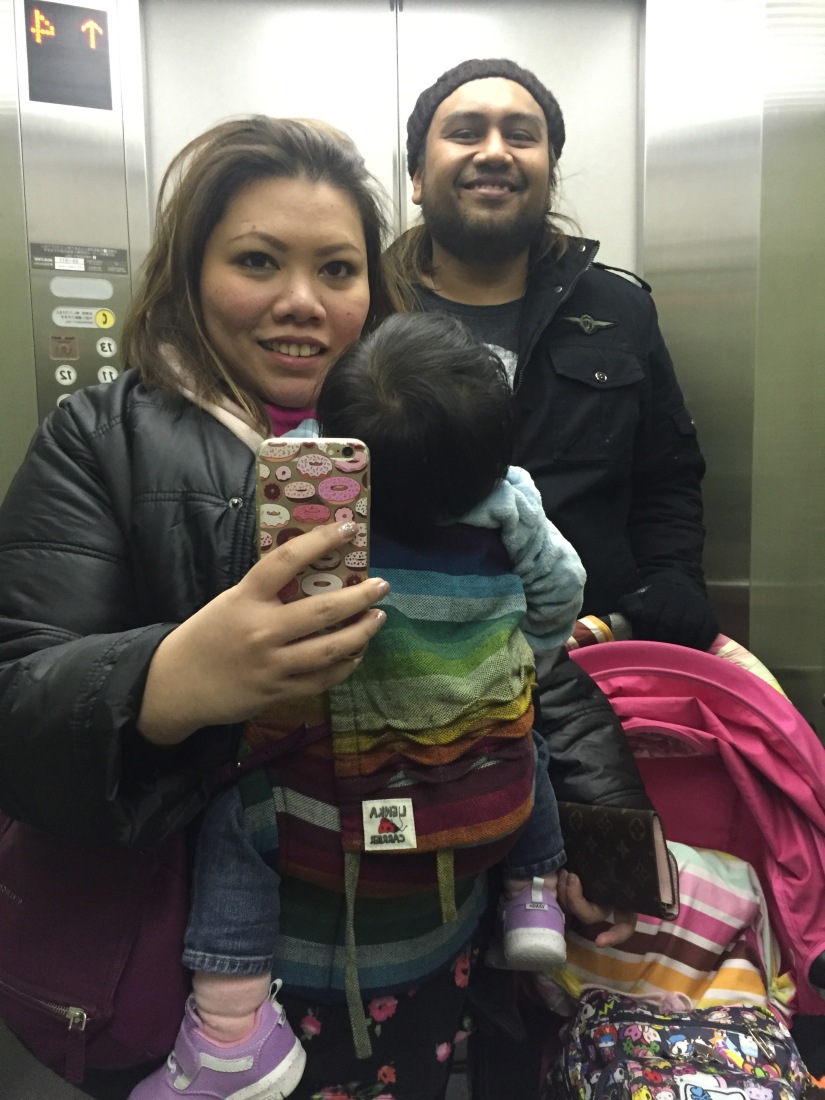 And that’s muka penat, tak sabar nak balik and get the damn heater on!