Continuing my Tokyo Post. you can read previous posts here.

We woke up really early for this Day tour cos we gotta be at Keio Plaza Hotel by 8.30 am and we don’t want to be late and say bye bye to our money.

I bought the Mount Fuji & Hakone Day Tour package from Japanican.
We chose the package with a return trip via the bullet train (Shinkansen). It’s ¥16,000 (S$200.00) per pax so we paid S$400.00 in total for the package. It’s free for infants.
They have adjusted the price to ¥17,000 (S$211.00) now and you can also check out other tours organised by them here. They have a local office in Takashimaya Singapore but we only purchased the Disneyland tickets from them and purchased the Mt Fuji package online cos it’s cheaper by about $30+.

We took a cab to Keio Plaza Hotel even though it’s only 10 minutes walk away cos i didn’t wanna take the chance, get lost and then miss the bus. 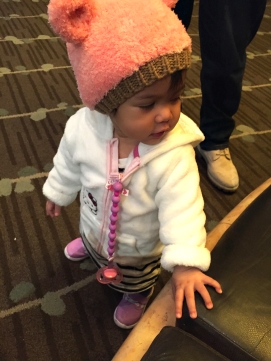 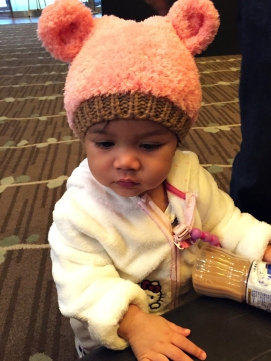 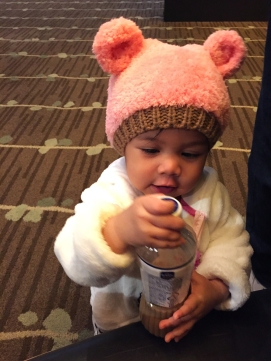 There’s a convenience store at Keio Plaza so we bought some onigiri and stuff ourselves silly after we’ve reported our attendance. 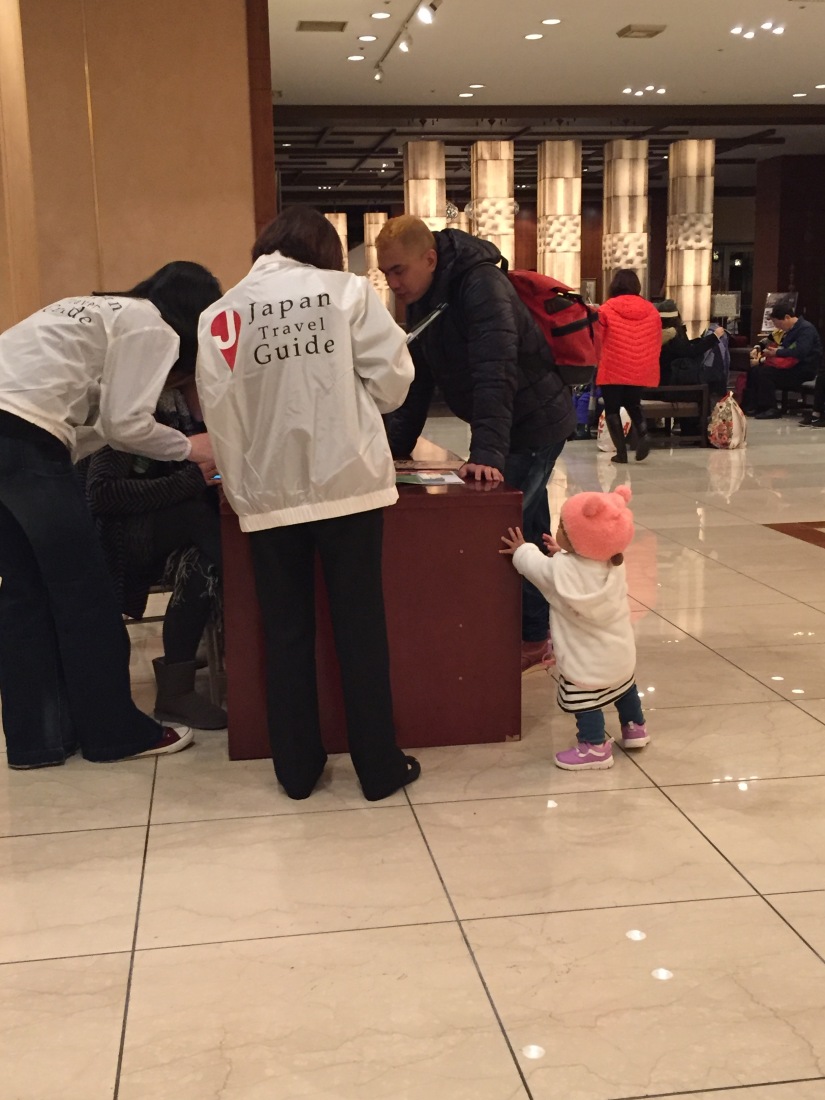 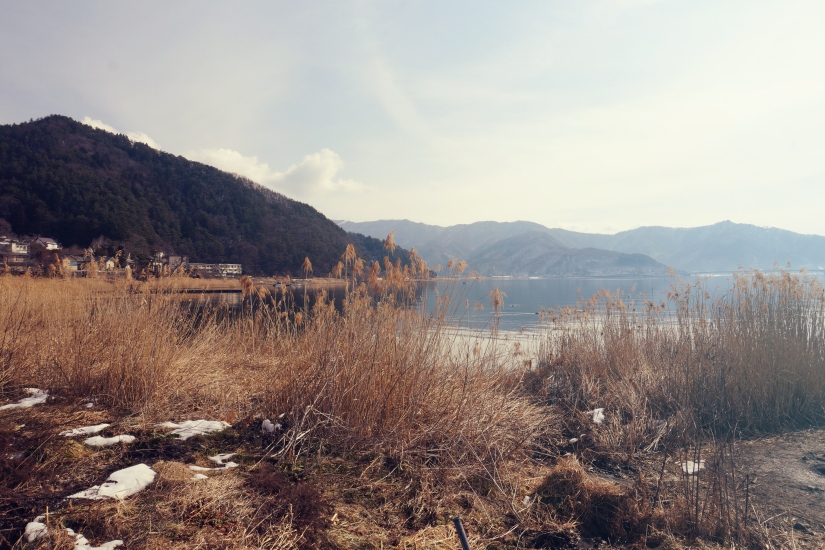 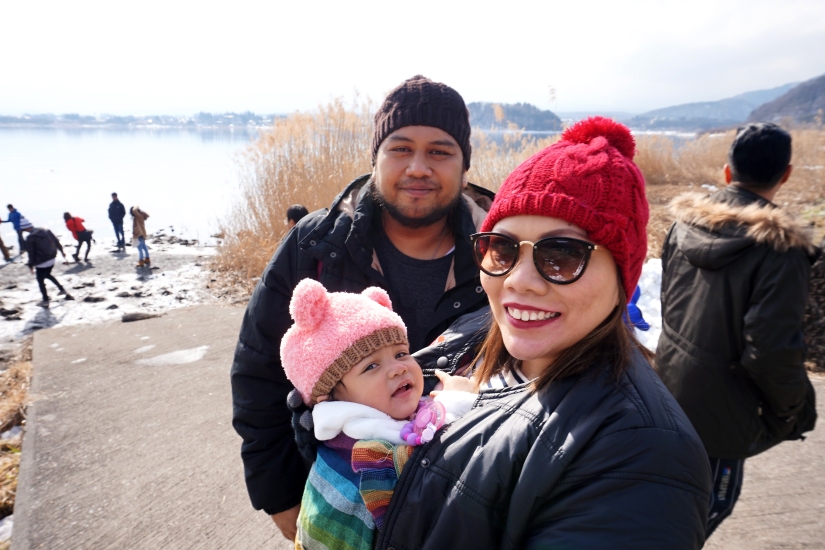 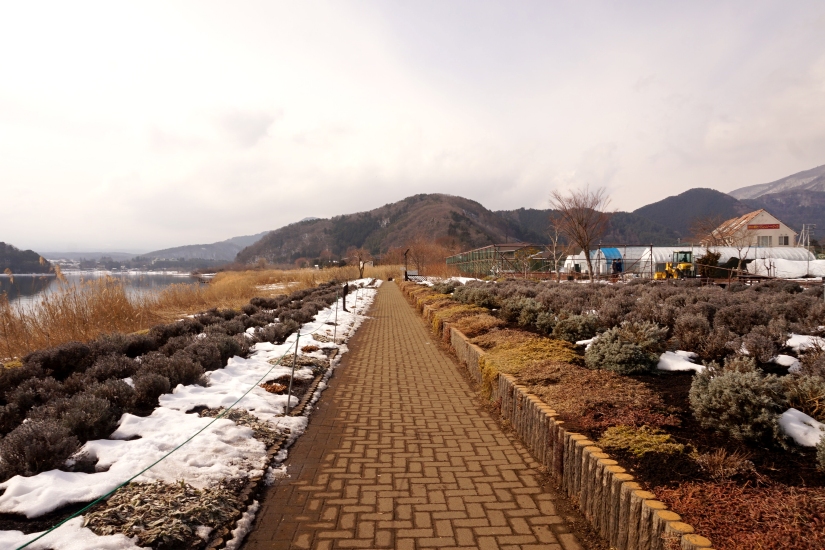 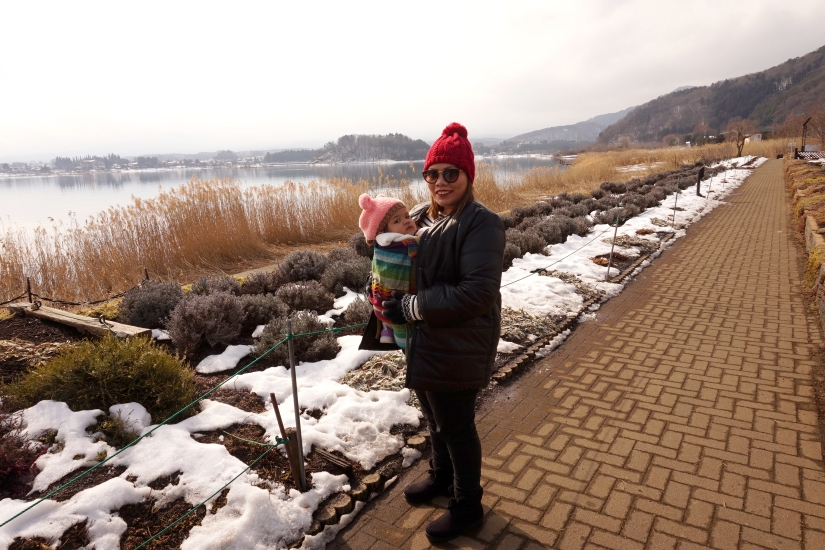 Our 1st stop is Lake Kawaguchi. Apparently during Spring you can see Lavenders everywhere. Cos it’s winter, everything is dried up here. And you can actually see Mount Fuji here. It was quite early when we reached so there was a huge cloud shadowing the shy Mount Fuji. 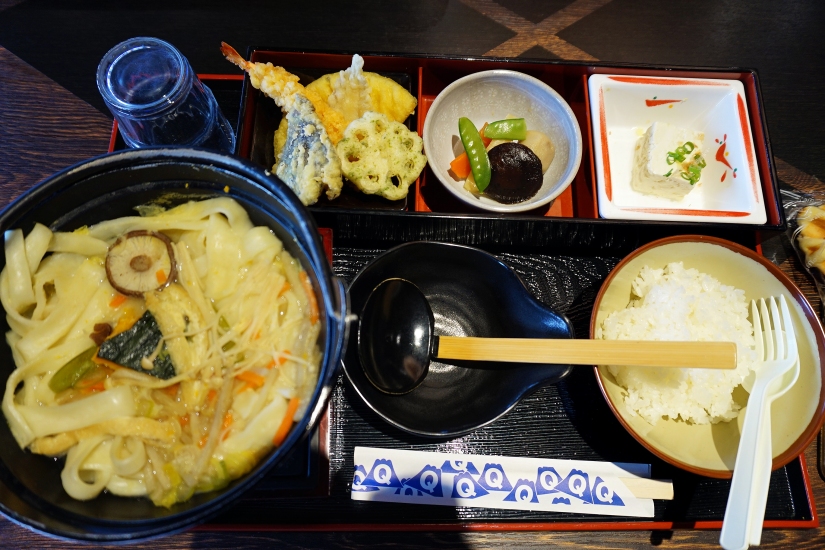 They brought us to a Resort Theme Park area for lunch. We requested for Seafood & Vegetables only. Also confirmed that the broth is not meat-based. The lunch was ok ok lah. Asalkan kenyang cos i don’t think we got other options to eat somewhere else. 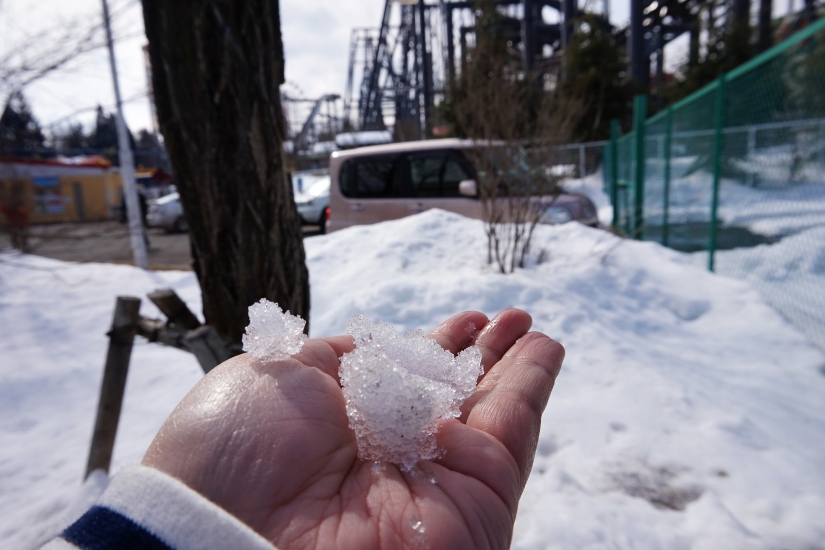 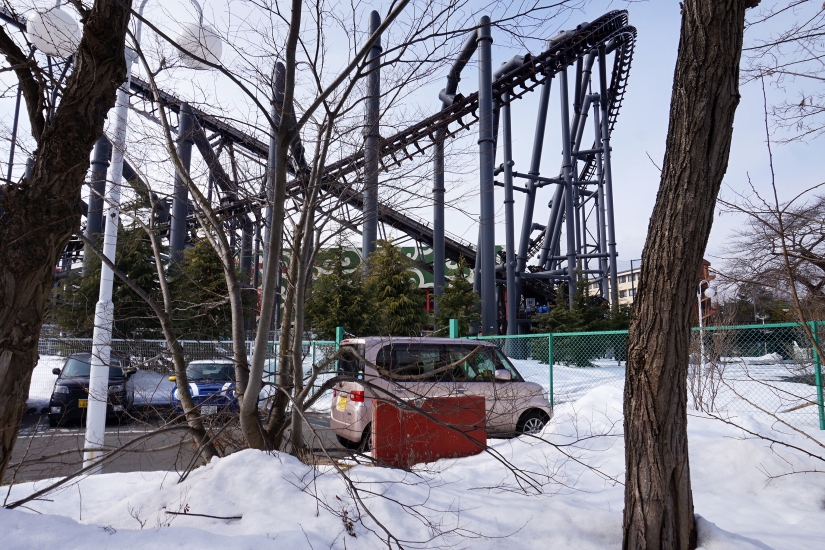 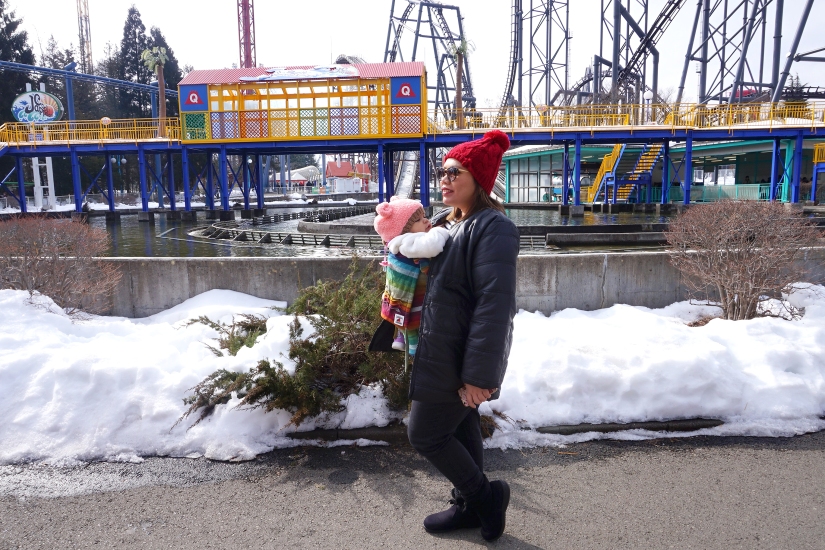 The theme park looks quite cool ah actually. They have one of those crazy japanese roller coaster (that i will never queue up for!) hahahaha. 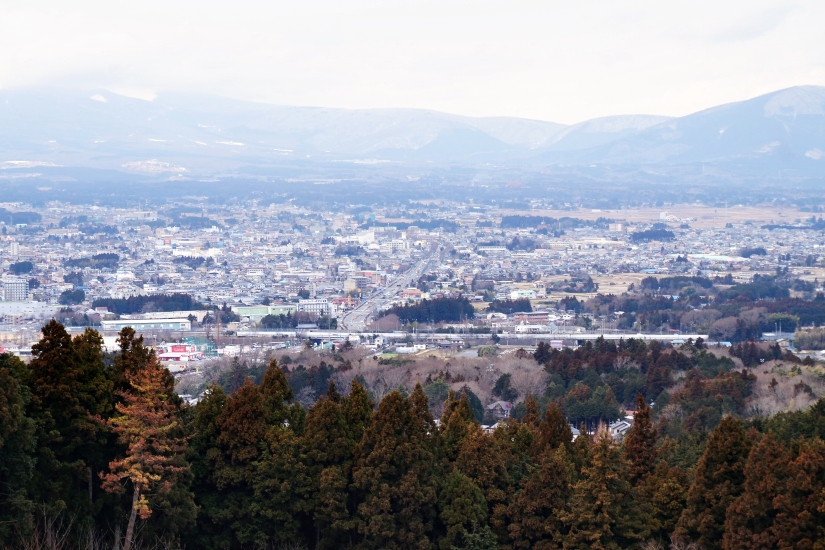 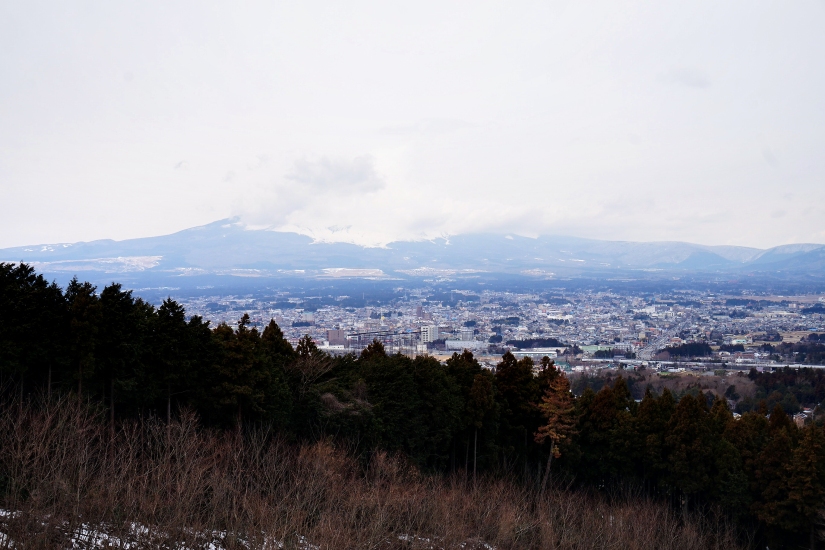 They brought us to another Mount Fuji viewing point and we could see the Mount Fuji but i can’t seem to capture it on camera. I don’t know why seh. 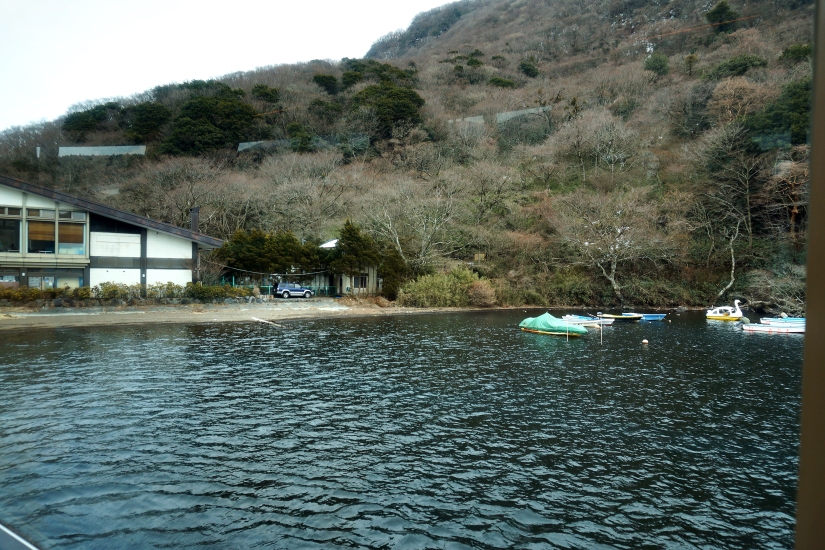 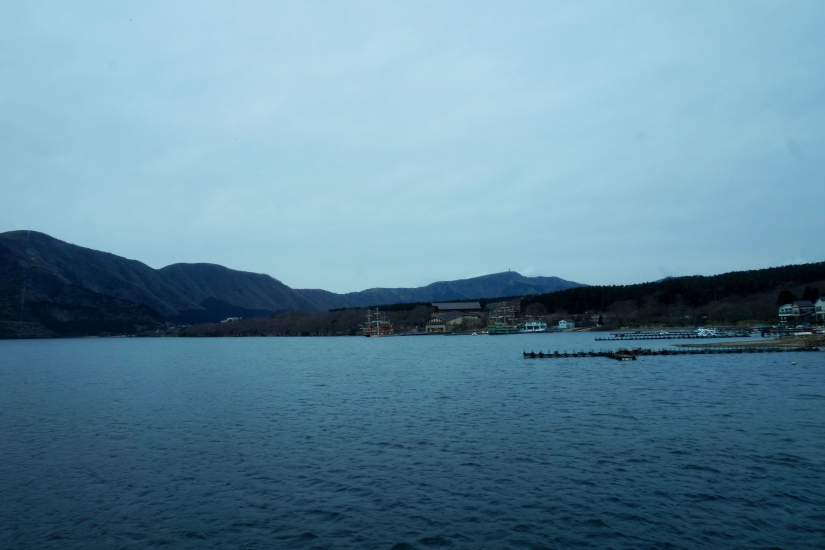 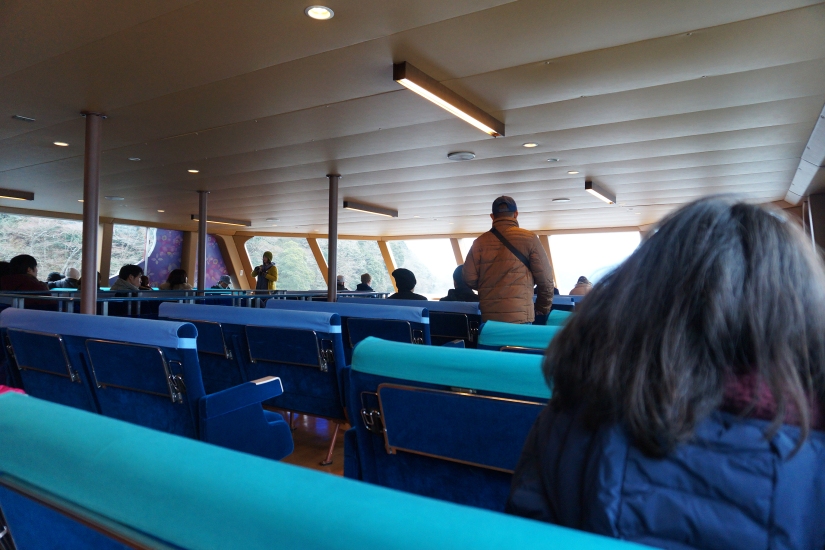 Our next destination is Lake Ashi where we took a Cruise Ferry. It’s a short ride but really peaceful surrounded by calm waters. The ferry also took us to the Ropeway Station.

You know i didn’t actually research how the Ropeway would look like. I thought it’s like the usual Cable Car we always take to go Genting Highlands. Turns out to be bigger and can fit at least 40-50 pax inside and it is so so stable. I couldn’t feel it swaying ke apa. Amazing. 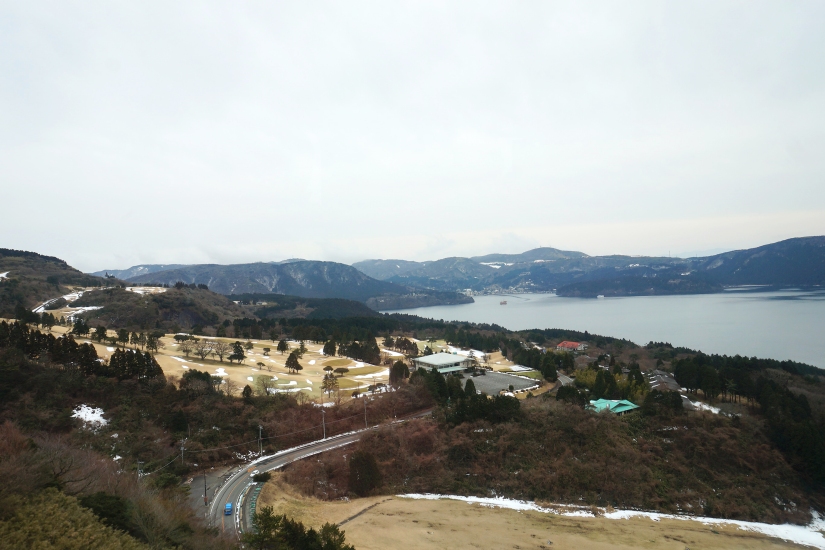 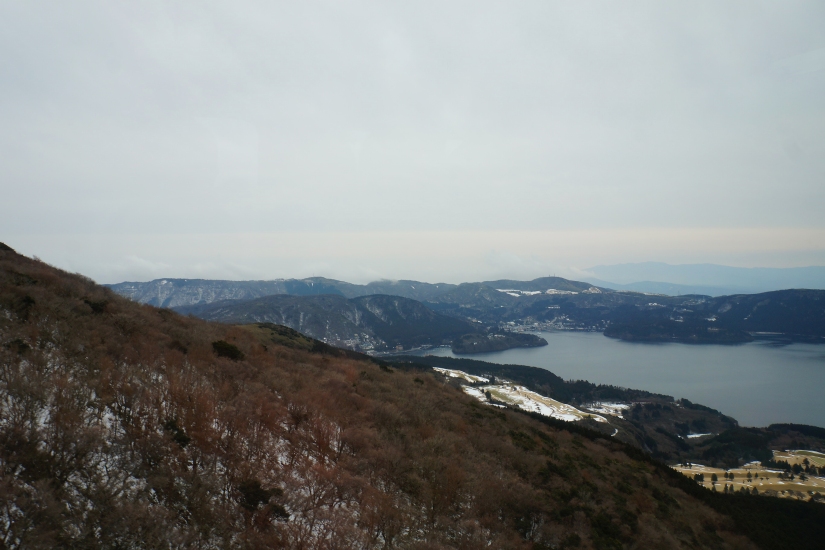 View from the Ropeway. The ride took about 7 minutes. Most of the trees had icicles on them. Too pretty. Macam cerita Frozen. 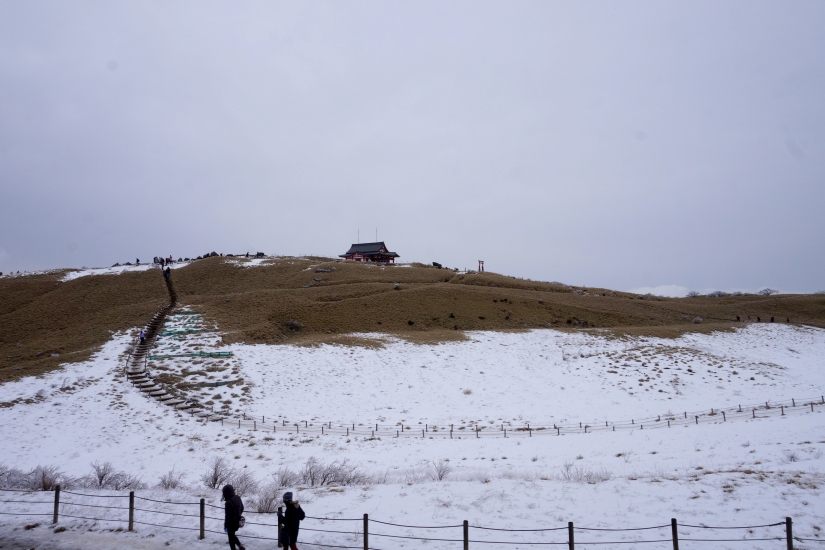 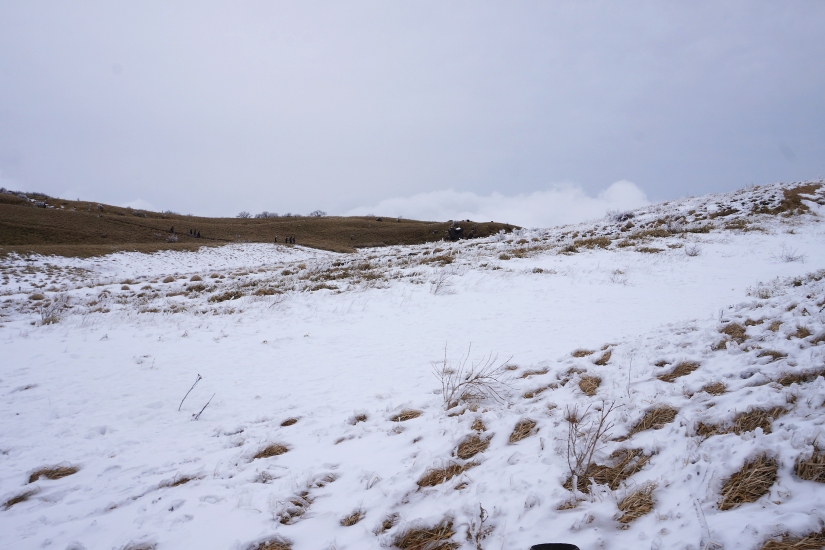 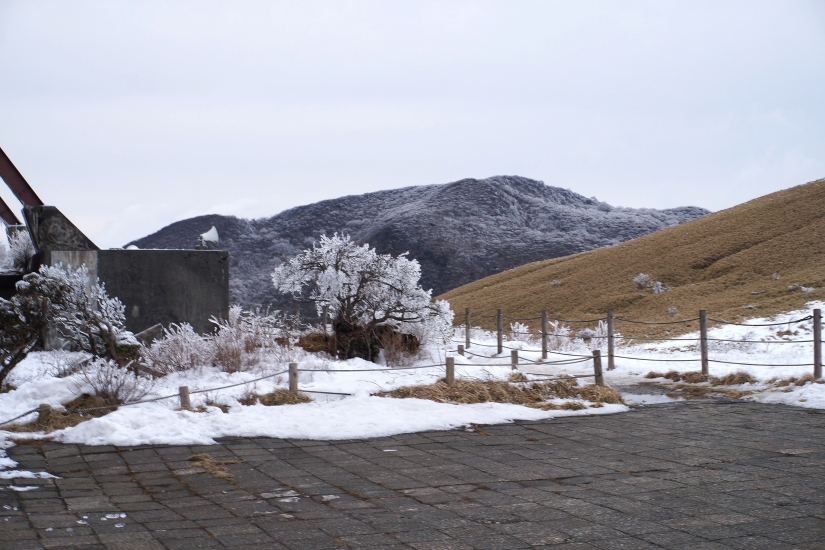 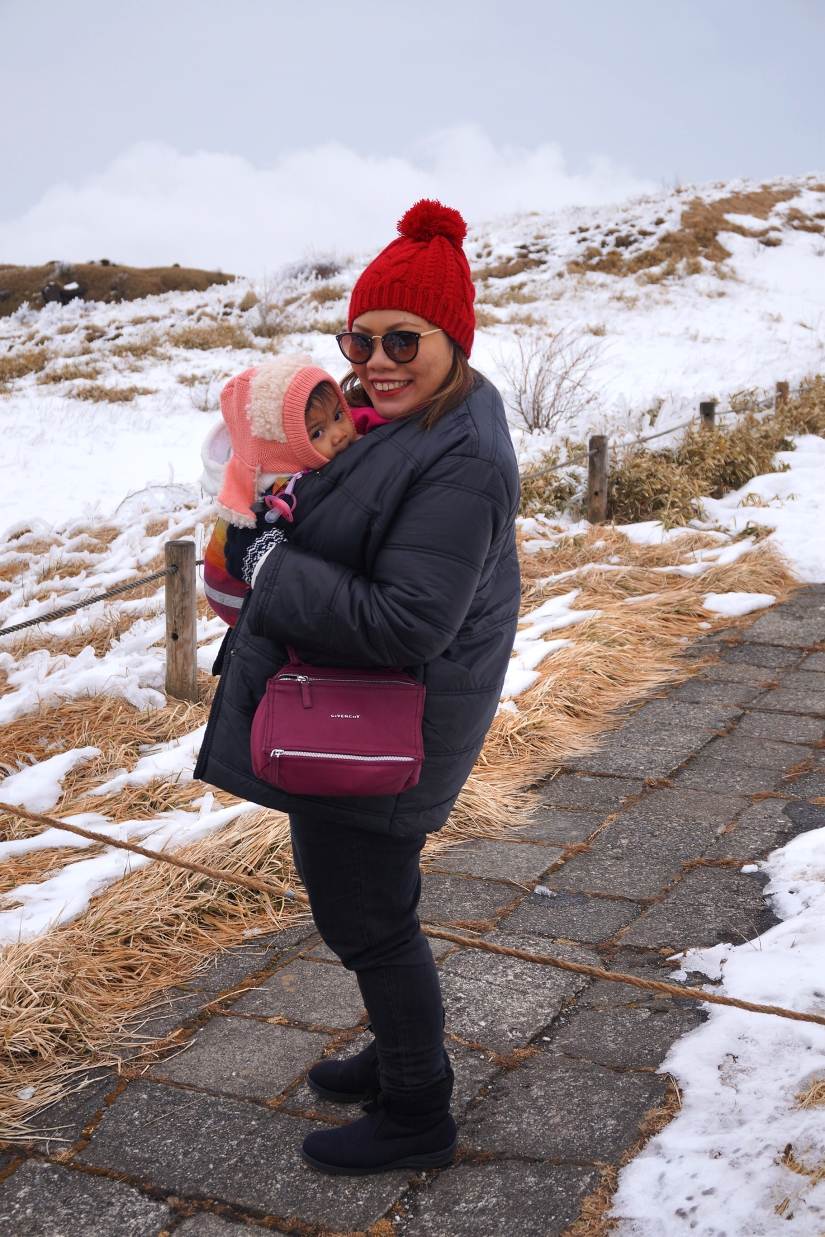 To be honest, i wasn’t expecting to see snow. I know it’ll be cold gila. And yes cold gila indeed at -18 deg. Brrrrr… But according to the tour guide, there were snowfalls 3 days before. I was freezing guys my face so stiff macam baru cocok botox but we were kinda prepared for it. Tampal heat packs & all. I just had to. It’s not just cold cold, but the wind was really cold as well. Anyway, i was reading on Mount Fuji and learned that climbing up Mount is only safe between July to August. It is deemed unsafe to go anytime other than those two months cos of the extreme weather conditions. It can be as low as -40 deg at night. There were also cases of people blown off the mountains by the strong wind. Scary shit mannnn.

I wrapped Nadya like a ketupat ok. So scared she’ll be too cold but member chill je. Cos i had her in the baby carrier so she was really warm & cosy in there.
There was another toddler up there and he was crying so hard due to the cold. I felt so bad for him and i resisted the urge to shake the mother and tell her to get her ass up back to the sheltered area cos her son was obviously too cold. Then there’s another angmoh couple, with a baby in a stroller up there. Relax je. Konon jalan2 kat shopping centre. Hahahaha. 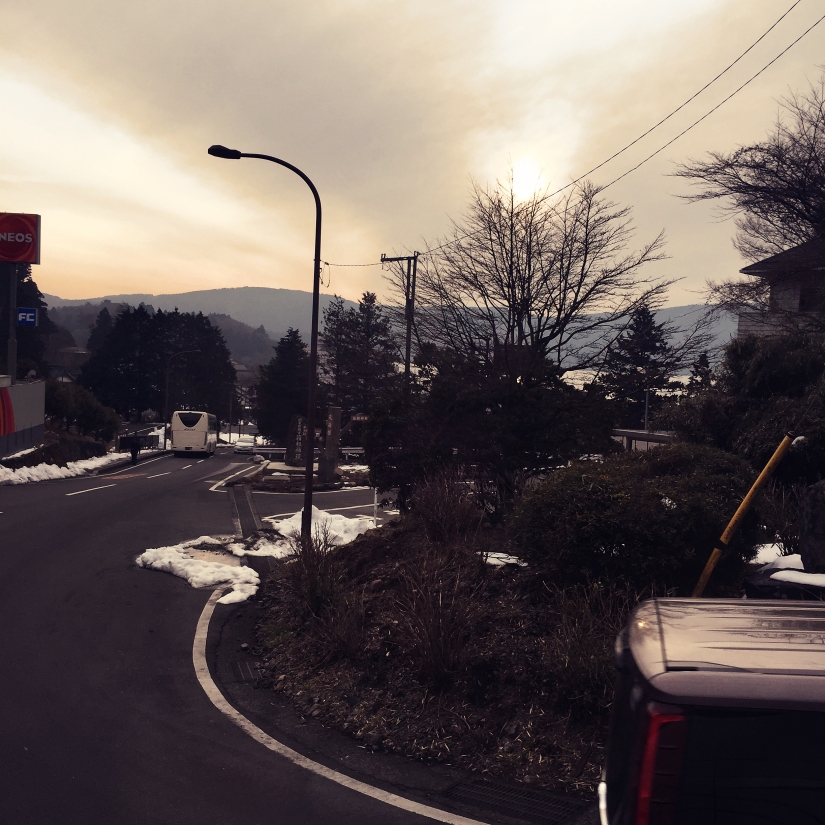 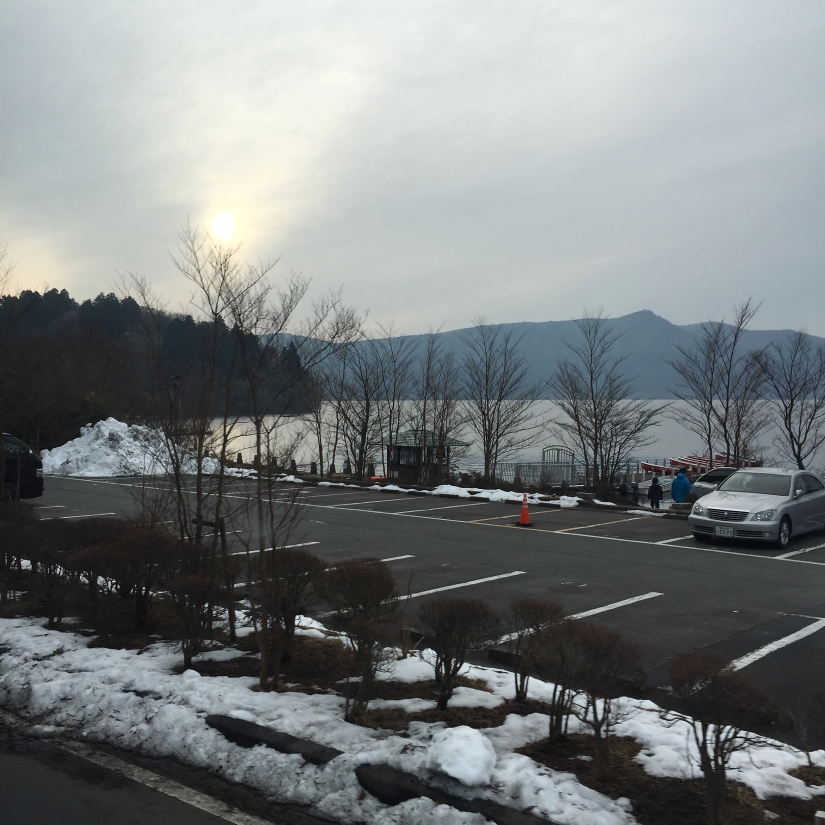 The sun was setting as we left Mount Fuji to take the Shinkansen! The tour guide brought us to the station itself and then he went to the ticketing office, got himself a pass and brought us to the platform and told us to wait for the next train to Tokyo!

I was really excited cos at that same time, a Shinkansen just drove past us and it was so fast lah!! It came & left the station in 7 seconds. I was recording it on my phone. That’s why i know. Hahahahaha

We didn’t take any pictures in Shinkansen cos we were so so tired seh. Panjat gunung and all. Lol.

That’s the end of our Mount Fuji Day tour. Will continue Day 3 in the next post!