Wanted to draft this post earlier but was too busy to! For the past two weeks, i went to two baby fairs and have striked off almost 80% off the items on the Baby List. Alhamdulillah.. Kind of relieved because i think the exhaustion is setting in. I’m getting lazier to do stuff / go out especially with the weather.

The day we collected all our pre-orders. I insisted Rusly bring the delivery trolley and i wished i brought my luggage as well because we bought some other random small stuff as well. The 1st trip in, we went in with the trolley to carry all the bulky items and i really mean bulky!

We didn’t bring that supermarket trolley though. Only used it to transport the items from our void deck & back up to our place.
We didn’t bring back the Baby Cot as well cos it was quite bulky and wouldn’t fit the car and true enough, after filling up the back seat with all these, we wouldn’t have space for the baby cot! We added baby beddings etc to qualify for free shipping & installation instead and they mentioned they’ll deliver it in November although i’m trying to push it to December since we have not done up the nursery yet and also cos i don’t want them to install the baby cot too early and let it collect dust. Lol

Some other bulky stuff we bought off the fair includes the Babysafe Mattress cos it was on sale. I’ve been wanting to get the Latex mattress cos apparently it’s not as warm as the foam mattress. The mattress size that’s suitable for the baby cot cost $239.00 at Mothercare but we managed to get it at $189.00 instead and they threw in some fitted sheets etc. I know some people think it’s not necessary to splurge on baby mattress but really it’s just a preference. Just like how we prefer to sleep on good mattress cos we spend hours sleeping, i think it’s essential for babies to have a good mattress too and i think $100+ for a Latex mattress is a reasonable amount. Sorry, just ranting because a friend was ridiculing me for getting a $100+ mattress when i could have just got a cheaper one at Pasar Malam. I really have nothing against it. It’s your choice and maybe your allocated budget for your baby’s mattress but don’t tell me it’s ridiculous for splurging on my baby’s mattress. Sigh.

We also bought diapers! After reading so many reviews, i’ve decided to try Goo.n Diapers for a start. Reviews by mummies mentioned it’s soft and absorbent. Bought 2 packs of Newborn Size & 2 packs of Small Size. Apparently the newborn size cutting is bigger than some other diapers. Taking a risk here and hoping that we can use up all the newborn diapers before she grows out of it.

Got myself more Mustela Diaper Rash Cream since it was on offer and then i saw a booth selling Earth Mama Angel Baby products. The price after discount is quite comparable to the price listed on iHerb so i went ahead to buy the Bottom Balm for use when we go out since the packaging is quite small and handy. Also got myself the Bottom Spray because a friend recommended it and i saw so many rave reviews on it and the Nipple Butter because it’s all natural and smells yummy! Hahaha. However, the booth were selling the teabags at quite a steep price so i skipped that and would just order off iHerb instead later on. I wanna try the Milkmaid Tea (for breast milk production), Organic Heartburn Tea (to relieve heartburn and i see it coming very often in the last trimester cos i had it bad during the 1st trimester) and the Third Trimester Tea (just because of the Red Raspberry Tea Leaf ingredient! Lol) It is said that Red Raspberry Tea Leaf relaxes the muscle on the uterus during contraction. It is also believed to make labour easier and faster.

Me – when i see anything that makes labour easier. Hahahaha

Lastly, we also got our stroller. LIKE FINALLY!
We finally decided on the Babyzen Yoyo. Rusly was sold when he saw how compact it is and the ease of folding & unfolding it. Love that despite the size, it is of good quality, stable and errrrr an eye-candy! Lol

We chose Pink for both the 0+ and 6+ Bundle and the good thing is, if we do have another child, a boy perhaps, Insha Allah, we can easily buy a new colour pack and change it to another colour and it’ll be a brand new stroller. This also means that the seat pad, the hood etc is all washable by machine cos it can be easily removed. We also chose the black frame because it looked more sleek compared to the white frame. So yay! Stroller settled. We have not fixed it yet though. Maybe nearer to the date lah… or when the nursery is more and less complete.

As of now, the nursery looks like a storeroom! 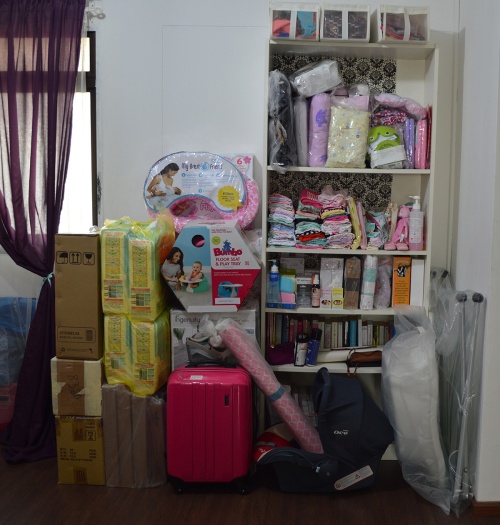 Arranged everything at one corner of the nursery until we get a wardrobe for baby. More about the nursery plans soon!

While waiting for Rusly to finish his jamming session at Whitley Road, i took a bus to Taka for their Baby Fair to kill time. Was mainly interested to get Pigeon stuff since they did not participate in the last Baby Fair.

I had to keep telling myself that i cannot lose focus because i have to hand carry everything myself.
So all i got from Pigeon:

Most of my mummy friends recommended me Pigeon Disposable Breast Pads because of it’s soft texture and it sticks well!
So i got 2 packs since it was going at $25.00 for 2 boxes. Not much difference in price lah but since i was there, just grab je lah.

Fisher Price was having some sale on their baby clothes at $3.00 each and i know i’m not supposed to buy any more clothes but they’re too cute at $3.00 each so i buy those 6mths upwards. Lol

So that kind of concludes my baby shopping so far since we’ve covered most of the items she needs.
Now i’m just praying and hoping the last trimester will be all good for both of us and it wouldn’t hurt to pray for an easy and as painless-as-possible labour as well kan? LOL