Yesterday was the gynae appointment and as usual, i took a cab down and something happened on the way to NUH. 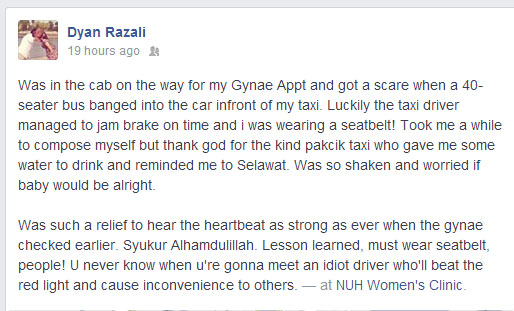 Got me all shaken up yesterday because it happened right in front of me and it could have been me. I was so lucky i was wearing the seatbelt because when the taxi driver jam braked, i would have been tossed in the cab like a Chef’s Salad. The kind pakcik saw me being so closed to tears drove to the side of the road, gave me a drink and told me to calm down 1st. I remember my heart beating so fast because everything happened so quickly. At the same time i was so worried for baby and i kept praying it’ll be alright. Thank goodness we were on the way to NUH so i knew i’ll have to tell this to the gynae.

Waited about half an hour before i could meet Dr Citra and told her what happened earlier on. She was so calm, hence calming me down as well. So far i don’t have any bleeding nor any waterbag leakage etc. Was thinking of insisting on a scan initially but when i heard the heartbeat going strong at 160 bpm, i knew baby is alright. I then told myself i have to forget about the whole incident because thinking about it would not be good for me & the baby. But i had difficulty sleeping last night because it kept replaying in my head.

But this morning, i woke up feeling so good. And really grateful.  Syukur Alhamdulillah, i really cannot express thanks to Allah for protecting me and the little one.

On another note, i was still upset about my non-weight-gain. I did not gain any weight since my last appointment in fact it is still lesser than my pre-pregnancy weight and lately i’ve notice dry, cracked lips and the gynae told me that’s because i’m not drinking enough water and baby is thirsty and keep extracting my current water intake. I very stress.

But Dr Citra reassured me that we live in a region where most of us are well-nourished. Hence baby would still be healthy even if the mummy is not gaining any weight. In fact i should be happy because i’ll have lesser weight to lose later. But i must up my water intake because i’m dehydrated. I really can’t believe i’m fussing over my non-weight gain. After all that binge-ing on cakes, kueh tat and nutella, 2 kg pun tak naik!

Trust me, i ate a lot of junk the last week. I asked for ice creams, ate a lot of leftover Pineapple tarts from Raya and i ate Nutella from the jar. Pre-pregnancy, i’ll be 2kg heavier by now. My guess is, baby is a heavy eater. Like the father.

To make it worse, met my friends for dinner last night and they both commented i look thinner than pre-pregnancy. Le sigh.

Now, the in-laws gave me some durian mooncakes and it smells heavenly! I’m undecided if i should indulge or eat a bit only. Because nanti bukan weight je naik, my sugar level also naik! Pffft.

8 thoughts on “The Close Encounter”