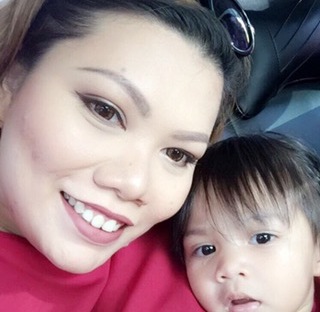 With Nadya venturing deeper into toddlerhood, i’ve learnt how to pick battles with her because sometimes there’s no point getting so worked up over something that’s beyond my control and at this age, they really test your patience.

I don’t have any preference in bringing her up because i prefer to just go with the flow and that’s hard cos i’m such a planner but i gotta admit raising a kid is not easy. You don’t have time to refer to your Excel sheet to see what’s good or not. U just react to the situation.

Earlier today, Nadya managed to twist open my nail polish bottle and by the time i realised she has it in her hands, she quickly put in the nail polish wand in her mouth. Ahhh such a darling. Then i realised there’s no point getting angry.
So i told her “you can’t do this. It’s dangerous” and pray she understands.
I wiped her mouth, let her drink water and she showed me an apologetic face. Lol

Eating time can also be challenging. Sometimes she’ll go on a strike and refuse to eat anything else but biscuits & “kokok” (keropok) and forcing her to eat would be against what i believe right from the start. So i follow her cue. If she wants to eat, go & eat. If u want to eat keropok all day, gasak lah.

When she eats, i’ll leave her to it and she gets to decide if she wants to eat with her hands or her spoon. Some days, it’ll be hella messy. Some days, i don’t have to clean up that much. Scolding her when she plays with her fully loaded spoon is pointless too. So i’ll tell her not to do it and if she keep doing it, i’ll just take her plate away and tell her “No more food. Told u to stop playing.”

I guess this works for us now. For my sanity at least.

But i’ll be kidding you if i tell you i’ve not snapped at her.
Truthfully, many times. I’ll feel so guilty after that, i’ll break down & cry.

Everyday i strive to be a good mom. Better than yesterday.